"When my information changes, I alter my conclusions. What do you do, sir?" – John Maynard Keynes

This post is inspired in part by Josh Brown (@ReformedBroker), CEO of Ritholtz Wealth Management.  On his website this morning, he reprinted a tweetstorm regarding Glass-Steagall, when it started, when it was repealed and how the US has fared since then.

In this case, I am reprinting a conversation held with a couple of other Twitter users, regarding the bull and bear case for the USD.  These kinds of conversations are usually held in the evening, after a long day and good meal.

It begins with a comment from @PainCapital (PC), regarding the following chart posted by @MarkNewtonCMT (MN):

“Would be a beautiful head and shoulder.”

This refers to a technical formation in the price action of a ratio between Developing and Emerging markets (not sure if it is currencies or equities, since Mark Newton is the owner of this proprietary indicator and it is not clearly stated in the graph or his tweet).  What he does mention in the tweet is the following:

“Action in US Dollar index also important, as further lift above May highs would make life “difficult” for EmergMkts”. 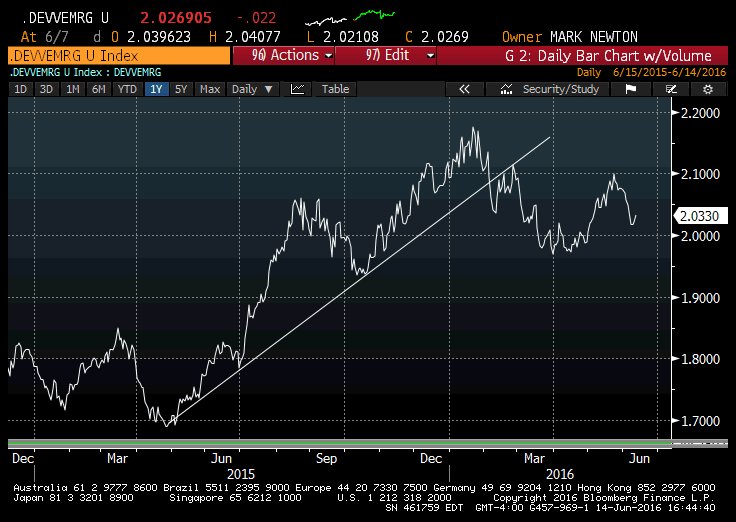 A head and shoulders formation in a graph usually indicates the conclusion of a positive trend and reversal to a negative one.  My response to PC was the following:

“Not going back up…”

A person I frequently exchange ideas with, @OrangeTrader (OT) chimed in:

OT – “I ask you both – how doesn’t the USD go up?  Just curious.  Epic QE still ongoing globally.”

Me – “What makes you think US won’t be enacting loose monetary policies as well”  If FED can’t raise IR, USD is capped.”

OT – “They have to; however if US MoPo (monetary policy) remains “loose” or static, everyone else is still printing EU and JPY via QE.”

OT – “Dilution of FX is a form of depreciation, correct? If Fed isn’t printing and everyone is, USD goes up.”

Me – “ROW (rest of world) has been printing since last year and USD stopped going up as FdFd (fed funds) expectations went down (still happening).”

Me – “They will, it’s all about expectations what may happen, not what is happening.”

Another Twitter buddy, Adam Scott (AS, @AdamBScott1979), pops into the discussion. His first comment refers to my reflection on rest of world printing.

AS – “In theory, yes, though Fed was printing before anyone else and USD didn’t weaken materially.”

In response to all this, I posted the following graph and commentary,

“QE1,2,3, began Nov08, ended Oct14. Tapering began Feb14.  Reaction to QE very negative, but (and) very volatile. As QE stepped back, USD began to rally, helped by Fed-induced IR fears and later by QE in Japan and Europe.  Econ conditions in US now seem to have caped USD strength, leading me to believe this will continue if US follows ROW into weakness.”

The graph is the historical moves of the US Dollar index since January 1973.

OT – “A la, USD strengthens against everyone else because they are “the strongest economy” in the world.”

OT – “So if you’re argument is USD capped due to US econ, then it’s negated b/c JPY and EU way worse.”

Me – “Obviously, if stocks in US begin to rally, money flow into US will support USD.”

Me – “If stocks downdraft, liquidity in mkts/confidence will drop, USD reflecting that -ve (negative) confidence.”

AS – “I’m not sure it’s that obvious/simple…? If that were the case USD would be near ATH’s (all time highs).”

Me – “Well, USD did break to highs in a short time frame, within a larger period of trending weakness.”

Me – “Our world is building fissures and US has lost some of historical safe haven status.”

Me – “And to top it off, why would anyone accept -ve (negative) rates on bonds, when UST yields more…”

AS – “Just currency hedging, nothing more.”

Me – “Perception regarding safe haven status has changed.  Of course, it could all be a CB (central bank) conspiracy…”

I love having these type of conversations with others, even if my arguments may seem overly simplistic at times.  Franciscan friar and logician William of Ockham (c. 1287-1347) is the person responsible for a problem-solving principle, commonly known as Occam’s (or Ockham’s) Razor.  It simply states that:

“Entities should not be multiplied unnecessarily.” – Phil Gibbs, UCR Dept. of Math 1996.

The most commonly derivative statement used by scientists is:

“When you have two competing theories that make exactly the same predictions, the simpler one is the better.”

Perhaps the most common and more sensible derivative is, “Keep It Simple”.

Keeping it simple is important when analyzing scenarios such as the one we live in presently.  The factors that go into calculations of probable economic and financial results are many, the weights that each have on unfolding events are unpredictable at times.  Therefore, you will often find different opinions that arise from the analysis of the same data set.

My personal opinion arises from the analysis of charts and an attempt to understand how globalization has affected investors.  It is important to note that Japan and China hold over 38% of all US Federal Debt (US Treasuries) as of December 2015.  This means that those two countries are the US’s principal “bankers”, effectively changing the balance of economic power in the world.

The Cold War was primarily a standoff between the old USSR and the US.  Now, there are more  players on the global scene with considerably more influence than before:  China, the European Union, Russia, Japan and the US.  The globalization theme is showing cracks, which also means each particular currency carries more weight, thanks in part to the nationalist themes that are arising.  It is a simple issue of math, each individual numerator carries less weight globally as the number of denominators increase.

Could I be wrong?  Most definitely.  I am not smart enough to think that I can skip chart watching and analyzing events.  Every day brings new challenges and we live in most challenging times.